I just attended , an interesting event this evening. The event try to arrange a meeting between startup founder with a hackerx or we can said as  an awesome potential recruitment. Hackerx is based in USA and likely this is their first event in Singapore or maybe Asia. 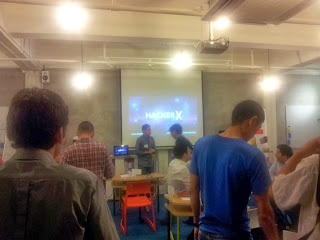 Overall, the event is nice. Anyway, I found one link that have . The concept is hackerx organizer will invite about 50 software developer and around 10 to 20 startups. The developer likely is picked by browsing and selection through online resume. Perhaps Linkedin. The invited developer can come free of charge. However the employer have to pay some amount of money to attend. The main content of hackerx is speed dating between startups and prospective employees. The startups founder will sit in some of chair and desk provided inside the venue. The invited developer will queue for 5 minutes interview with startups owner. The interview more or less will consist about tell me about yourself and I will tell you about myself. There will be impossible to do some kind of coding challenge or deep architectural design discussion within 5 minutes only. The event is limited for about only 2 hours. Startups list is announced exactly at the event day, so that we don't have much time to research and getting know about the startups. Actually, in this current event most employer looks for front end developer. I was accidentally invited perhaps because some wording in my Linkedin profile mentioning some "front end" words. 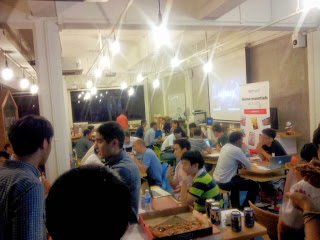 There are about 18 company that come to this current event.

Unfortunately, because limited time I just have chance to talk with some.

Hackerx is more to networking rather than recruitment because it will be little bit difficult to get to know each other only withing 5 minutes. Job opportunities is a great thing to get. However at least I can meet some new people there, with so many ideas that they bring. At the end it could got force as well for me to cultivating some ideas then writing prototype and launching my own startup. Of course there will need much times and extra effort to do the later one.

I have been using LLVM control-flow graph (CFG) pass for my static analysis research. Normally, I should be able to see the CFG of the intermediate representation of the program (IR) by running: opt file.ll -passes=view-cfgInstead of opening xdot that will view the CFG, opt opened Google Chrome