This month is special month. In November I celebrate my anniversary of marriage and my wife birthday. I get married on 19 November 2011. So, I have been married for 1 year. Time flies. Everything feels just like yesterday. I can remember almost all scenery on last year. How we (me and my wife) were preparing all the wedding things in very short time. I don't wanna re-share again about all those express preparation. I already blabbed somewhere else. I just want to make a retrospective for this one year marriage. 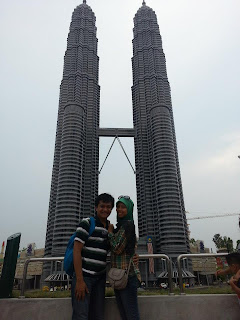 Most of the people will get marriage one time. Some of unlucky couple will decided to divorce. Decision to get married is the most difficult thing to decide for most people. Even more, for religious person, marriage is a commitment to God.

Marriage is often symbolized as a ship with a husband as the captain and the wife as a navigator. Both of them have important role. Captain cannot drive alone and navigator cannot take over the ship. Harmony between husband and wife will determine whether the ship will sail smoothly to the right direction or at the worst case there is possibility the ship will sink when conflict is escalated become so big.

Regarding that ship analogy, there is one value that always emphasized by my parent in laws since the first time I propose my wife. Usually person will choose a spouse based on similarity. Same hobby, same style, same behavior  same education level, same interest, same common attitude, etc. Human love someone who similar with them. This is important because what is the point of married with totally different people. But we have to realize as well that, there is no identical human. Even twin sibling will have considerable differences. More and more for the case man and woman which are fundamentally different. The key is the leverage the differences for the good thing. For example complementing each other. If wife is an expert of speaking and husband is a good writer maybe they can share their knowledge that will make both of them expert of writing and speaking. Of course this is only very shallow example.

After one year, although most of time me and my wife are in long distance, I can conclude several things about marriage. Marriage is sweet at one side but also challenging at the other side. But undoubtedly  marriage will make us fell more peaceful and  Because we will arrive at the position where we have somebody to rely on. There are several challenges as well. Some significant examples are conflict and egoism. It is almost impossible for two human that spent most time together, day and night, summer to summer for don't have any conflict at all. Conflict is a spices in a marriage said some wise person. But too many spices will not the food taste good even can make it throw to the rubbish bin as a garbage.

One day in one philosophy lecture in one of good university, professor ask a question to the class. "Who are 10 most important person in your life which you will spent most of your life with them? Write in on paper" said the professor.

The student start writing some names. Logically most of them will write closest family like parents, children, spouse, best friends, etc until the list fill up to ten person.

"Now remove 5 of them!" Ask the professor.

In confussion student try to follow the order. Most of them again will remove the so not close person in their life. The will stroke so not best friend. So the 5 person in the list will consist only very important person for them.

"Now remove 4 of them. Leave only one trully most important person for you."

Confussion getting higher. Now the student start to think very hard who have to be removed and leaving only one person. Until sometime the professor ask the class to stop their activity. Then he ask one of his most brilian student to reveal the aswer.

"If I could only choose one, she must be my wife. My wife is the most important person in this world." Said the student.

"Why?" Ask the professor.

"Parents are important, children are important. But in this life we cannot choose who are our parent and who are our children. God decide for us. In other side I choose my wife when the same time she choose me. So if I can select one as the most important person in this world, I will only select my wife"

"Life is beautiful. Be grateful for everything you have but keep fighting to achieve every of your dreams" Age is nothing rather than just a number increment. However the increment of age should be a great moment to do self evaluation. More